A continuation of the previous article; five more cats, and some further randomization listings for making them unique. The statistic line for cats, so as to make them useful in OSE, is as follows:

I think I got the ascending/descending AC right, as well as THAC0 to Base Attack Bonus/To Hit Bonus. I'll compile a good portion of this up later in a pdf, with a revised Dogs of Dolmenwood; so as to allow for more ease of use.

But first, a much belated return to me writing about cats. 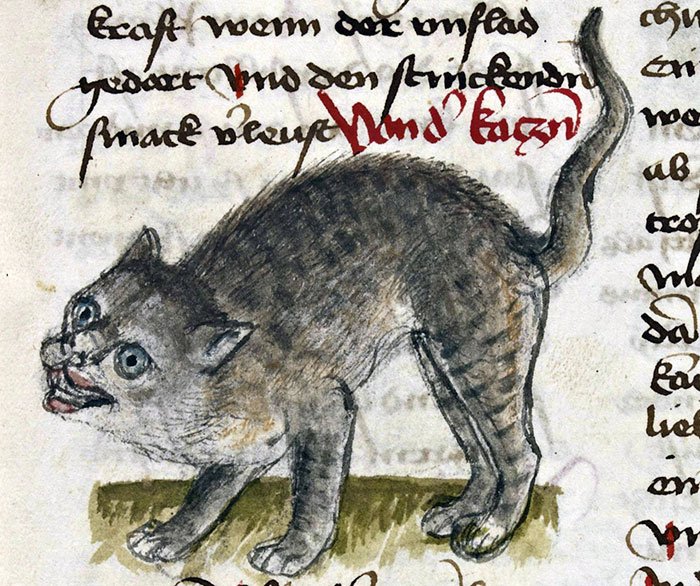 6. The Sweeperskit is a boon companion of the tenement house and the villein, as it preys on all manner of household vermin and pesky birds, and also assists in the cleaning of ones hearth. Sweeperskits are narrow things, with bulbous eyes nearly always of blue, and faces coated in a sooty point of black fur. They make use of spindly powerful limbs to climb up inside of chimneys during the day, basking in the latent heat of a previous night's fire, coating their fur in sooty ash, and killing any bird which might attempt to make its nest within. Their name comes from a habit of many a chimney-sweep simply placing such a cat in the chimney of a customer, letting it clear out any debris.

Sweeperskits are kindly to anything warm, and many are used in hospice care for the infirm as a means of keeping up body temperature. The internal temperature of a Sweeperskit is unnaturally high, such that if they were to sit in a vessel of water (which they would not appreciate) they could bring the water to a vague simmer in about five minutes with their violent vibrations. They are very lazy when not provided with a hearth, as such many a gentleman have been known to wear a live one as a stole under their winter coats. 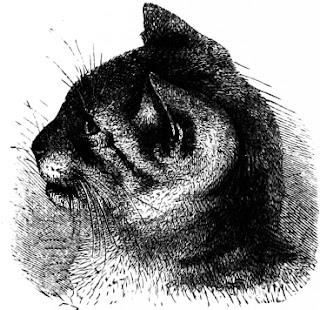 7. The Bellworthy cat is a common breed, often found in the backwater parishes hunting fieldmice and making comfortable dens in floral fields. Notable for their ears which perk up and uniquely fold so as to make the feline appear to be wearing either a papal tiara or a church bell. Bellworthy cats of great pedigree have been found in the portraits of religious leaders for centuries, and more than a few saints have proclaimed them as being the only cat who can sense the fiendish familiars which often assume feline form; and thus by some Divine Grace, Bellworthy cats are unable to be possessed by evil. But such documentation regarding cats being possessed by demons is esoteric at best, and such powers are best left to old maid's tales.

Bellyworthy cats are of capricious and friendly attitude to most; though they are purely outdoor cats and if not allowed to frolic and hunt field vermin they will succumb to depression and overindulge in whatever scrap food they can manage to consume, often resulting in obesity. Bellworthy cats are held in esteem by the Host of Martyrs and the Fraternal Church of the Stone Dove; and any servant of the One True God will likely hold the owner of a well-kept Bellworthy cat as a person of good and honest means.

8. Ogrekit are of a sad reputation, for in truth they are incredibly loving creatures of great intelligence; enough to rival a tipple-drunk Grimalkin if one is being honest. They are round, spud-lie in shape, with narry much to their neck; their limbs are stubby but powerful and their claws always seem to be extended fully. Their face is better described as merely a maw, as if someone had taken the mouth of a lion and placed it unchanged in size upon the much smaller cat. Its eyes are beady, often oblong and uneven, and seem to possess an infinite sadness---as well as eye crusties that are a tarnished, tarry black. They are, according to legend, the cats born into the homes of ogreish and brutish men. Most believe them to be vicious, prone to violence, and the devourers of children and filth.

This is all hogwash, of course. Any owner of an Ogrekit knows them to be kind, loyal, and loving. They are hefty creatures, and their clacking nails upon the floors of a home are notable enough as if to announce to the One True God that the creature is a-coming. A notable trait perhaps where part of their reputation comes from, is how an Ogrekit seems to enjoy the consumption of snails (shells and all) and oozes. Its iron gullet seems to allow it to consume such things in abundance, albeit making the kit both gassy and gurgling for the remainder of the day.


9. Eyewideners may very well be a lesser sort of demon than a proper cat, as they are scabrous, cyclopean, leathery feline-esque creatures which possess an uncanny malice and a penchant for the consumption of spectral energies. Witches and wizards of great potential may conjure an Eyewidener out from whatever dark space within the dreamspace or mythic underworld they originate in; though enough have escaped their masters to occasionally appear in the elf-haunted groves and fetid grottos of the mortal world. They do not yowl or mew, their sound is a hissing cackle; like a tea pot boiling over while a snake is cooked alive inside it.

Eyewideners rest on the heads of their owners, and in mutual slumber the master is revealed terrible cosmic truths; such that upon awakening the owner is able to see invisible creatures for a scant number of minutes; with such creatures appearing as vague misty shapes. Eyewideners, despite their frightening appearance, have been known to be used by witch-finders and charlatans alike in the combating of wicked spirits or the removal of haunts.

10. Common Wodecat are notably the most common sort of wild cat to be found in the woods and fields of the world, a mish-mashed blend of various breeds which appears otherwise like a normal village cat save for being a bit longer across the torso. Wodecats are renown climbers and can leap a good twenty feet from branch to branch. Arboreal hunters by nature, they feast primarily upon squirrels and small songbirds, whose eggs they enjoy swallowing whole. Their only true rival and competition in their hunts would be owls, whom they view with a vicious rivalry more befitting a dwarf in viewing of goblinoids than in such common creatures.

Wodecats are adequate pets, though often better left to roosting in a barn than being brought into the house proper. They view everything as beneath them, often quite literary, and if not given adequate room to climb and view from above they will cause a ruckus. They will clear out most vermin in a farm within a matter of days, expanding outward until they find a high enough place to perch and wait for more food to fill the gap. 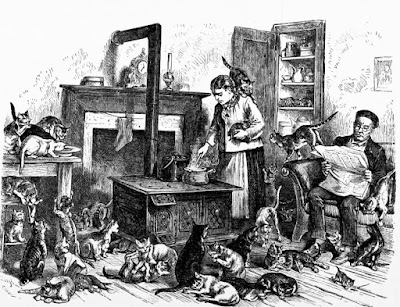 What's unique about my cat? [d20]
1. It has a stubby naked tail, sort of like having a big nipple coming off its rump.
2. It has several additional toes on each foot and enjoys placing those on your face.
3. It gives often painful "love" bites, as if tenderizing your flesh for consumption.
4. It carries baby animals, like rats or possum, upon its back until it decides to kill them.
5. It always seems to be eating bees and hornets...
6. It enjoys licking your overly sensitive bits of skin with an extra sand-papery tongue.
7. It seems to urinate on things you enjoy when it is upset with you.
8. It wakes you up every morning by biting at your nose and screaming.
9. It seems to sway its head and spin when music is played, as if dancing.
10. It never takes its eyes off of a spiritual entity, as if a staring contest might hold it at bay.
11. When fed raw fish it only eats the heads.
12. It enjoys bringing you "treasures," which consist mostly of mutilated vermin.
13. It hates your traveling companions and toots in their general direction.
14. It hates the smell of alcohol and is always tipping over cups and bottles of the stuff.
15. It has notched and mangled ears.
16. Whenever it coughs up a hairball, the hairball seems to be a twitching mass until you blink.
17. It gets into mewling conversations with other cats and looks at you judgingly if you notice.
18. It enjoys screaming at the most unpleasant of times.
19. It likes to rub its head into pungent items, drooling all the while.
20. It constantly "bleps" out its tongue, like it is trying to play a woodpipe.

My cat is... [d12]
1. A lazy lump of a potato, save for when I need a moment to relax and then it has energy...
2. An elegant beast which demands more attention than it really deserves.
3. Not really my cat, it does what it pleases and I just get to witness its greatness by proximity.
4. An adequate bane to tiny crawling things which wish to spoil my house and kit.
5. Good company and soothing to pet after a hard day's work.
6. One of those cats that thinks its a dog. This causes no small amount of chaos.
7. A wild animal and I always seem to forget that. It loves reminding me.
8. More loving than any romantic companion and will never leave me.
9. An ugly little scrotum goblin who I would die for.
10. A snuggling companion who provides me comfort.
11. A maniac creature who will be the death of me.
12. A precious little baby, no matter how fat and old they are.

Next Up: I have a mostly completed Vagabond class I want to give another run-through before I publish, as well as a starting generator for Dolmenwooding purposes. I might put out some character deeds; which are little things that encourage play style which I've used before in games.

Also the Rakehell revision layout is done, it needs a few corrections and I'm putting the pamphlets in it; and then testing a proof; it should be on sale as soon as I get that; hopefully within a week or two.
at May 12, 2019