Cyre, the Purple Jewel in the crown of Galifar, sits in ruin. The dead too numerous to be counted, seared away in supernatural cataclysm which still taints the land like an emanating radiation, like noxious fumes wafting out of a bloated corpse. This is the Mournland, for it is a place of sorrow and for remembrance of a dark event that destroyed a culture without explanation.

The Mournlands bifurcate Khorvaire, its borders defined by a powerful miasma which churns like a dust storm, like a warning not to enter. The mists are said to drive men to madness by way of unceasing malaise, they carry the cries and psychic fears of those who died during the Day of Mourning upon them. In the thickest of the fog, their shadows wage in endless war as silhouettes.

Bodies litter the Mournlands in various states of decay, the rampant arcane energy toys with the natural decomposition process. Fields of charnel atrocities twitch and seizure, choked cries by consciousnesses trapped in dead frames echo out on the winds. Some sites are locked in time, bodies fallen but unblemished by the ravages of time or vermin.

The fields of the Mournland, of Cyre’s former rolling hills and beautiful horizons, are overgrown. The grains which once created the most artisanal goods, crumble at the most errant touch into a gritty silt. Vineyards grow their crops, unattended, the fruits resemble fetal forms; it is likely pareidolia but only the most desperate would risk this unkindness of imagery.

The waters of Cyre have receded, turned crimson or reverted into pestilent bogs. Death strandings of all manner of creatures can be found upon the forsaken shores, twitching in half-life, translucent in the skin, bones shown. Flies drone endlessly, though they never seem to be present. Mechanical cables, larger than any sane thing, shudder upon the beach and trail back down beneath the waters in the distance. Steel Krakens, some say, but even a kraken should must obey the rules of nature. It should not be this large.

The sky is always cloudy, overcast, ready to rain down ash, greasy waters, or other pestilences upon the fog-choked land. Travelling the Mournlands without proper shelter is just as risky as travelling it without weapons at the ready. The tattered husks of civilization within are just as treacherous as the open wilderness.

Cyre did not deserve this fate, it was a land of beauty and plenty. King Jarot’s daughter was meant to inherit the crown, not this legacy of horror. Cyre has no true ruler anymore, though Prince Oargev ir’Wynarn can claim a right to rule, he has no land to call his own. He hardly has a people. Cyran refugees litter the surrounding nations, untrusted for their former military’s actions in the last war, for the glory they once had, and for the doom that some believe follows them. They are as a people, from a culture of high art and fashion, primarily now destitute and hopeless. Cyran artifacts are worth a lovely sum, ensuring a flooded market that forces them into further indignity, and the prevalence of scavengers who will plunder their former homeland; risking life and limb for their own petty gains.

The Warforged may find their purpose here, as the Lord of Blades seeks to make this ravaged wreck heap into a homeland for the betterment and propagation of his race. His supremacist politics, vicious rhetoric, and ruthless efficiency reveal him to be the very worst of Cyre and the Mournlands, married into the frame of a hulking mechanical monstrosity. For every cultural milestone he seeks to claim, he looks upon the rest of the world with the same ambition which denied Cyre it’s crown. The mantle of a becoming god calls to him more than any petty throne, and his followers must straddle the line between violent zealots and peaceable wanderers to those who encounter them in this blasted place.

Considerations for the Mournlands
The Mournlands are if you took a WWI no-man’s-land, turned it into Hiroshima and Nagasaki after the bombs dropped, and then allowed it to be the Chernobyl zone of exclusion. It is a place of tragedy, and therein lies the horror. It is fitting in a pulp perspective, but the tone should feel very "deep behind enemy lines" wherein the enemy is existence.

The Mournlands is not scary because it is filled with monsters, it is scary because it is wasted potential, it is a place where everything a civilization should strive for--maybe even deserve, has been inverted in a terrible way. The most beautiful and cherished realm of Galifar is now a heap of filth to suffer only the molestations of bonepickers, vultures, wayward cultists, and the misguided. Might makes right here, but this is not a place where goblin warlords wage for dominance in that philosophy; this is a place where might makes right because nobody is coming here to save you, nobody cares you’re here, you have no motives here but the ulterior; you cannot save this land, you will lose yourself here.

Characters who travel the Mournlands must contend with the mist, which will slowly infect their dreams and drive them into a depressive state where self-harm, suicide, or homocide seem to make sense as a means of coping with their utterly insiginificant place in a world where such atrocities can occur. Warforged are immune to this, in theory; those found in the Mournlands are considered to be some of the worst of their own kind---but it’d be too easy to blame that upon the mists.

Monsters in the Mournland
The creatures who dwell here represent the folly of man, of overgrasped ambition and nature’s inability to allow the wicked toil inflicted upon the earth to prevent animal life from attempting to retake the civilized world. 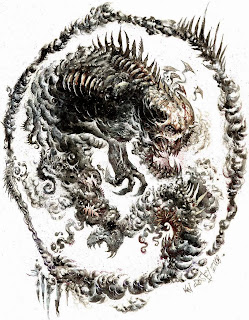 A swirling torrent from the mists, humanoid at a glance, like a man stretched and bent, broken and tattered into merely wind. It howls and echoes in profound sorrow, clutching ghastly claws of razor wind as if holding its hand might allow you to pull it out of this endless torment.
What’s it doing? [d6]
1. Shrieking and searching for something, scanning the environment with frenzied intensity.
2. Manifested in almost physical form, weeping and holding itself. The mists claim it when approached.
3. Banging recklessly upon the ruins of a structure, attempting entry, looking back towards the mists that spawned it as though it wishes to outrun the calamity.
4. Crying upon the winds, in baleful calls it asks where everyone is, why it’s so alone, why it cannot find them all.
5. It has its claws upon a looter, who as you watch, slits their own throat as they cry out how they “just want this to stop feeling so painful.”
6. Screaming up at the sky, cursing the Sovereign Host and beckoning any dark power which will let it see its family again.

A gelatinous pulsating pillar of blackest night, throbbing and sluggishly pulling itself through the land. The world around turns to ash, flesh grows tight across the bone, necrosis overtakes living tissue. When it aims its nucleus upon a being, they age away into ash.
What’s it doing? [d6]

1. Pulsating in a rhythmic pattern, as if communicating to something in code.
2. Leaning against a structure, slumped, as if resting; the structure is slowly aging itself to dust against it.
3. Submerging part of its base in a deep puddle of filthy water.
4. Seeking out organic matter to obliterate.
5. Remaining perfectly still, almost dried, as if inert. Rouses to life if approached by organic matter.
6. Spreading flagellum out, as if seeking to divide itself into two shrouds.

Steel cables, articulated by cumbersome, drag this leviathan of Cannith constructed folly at a slow pace. It is too large to engage with conventional weaponry. Its eyes shimmer a gemstone red, and its mouth is a spiralling razor pit of blades.


What’s it doing? [d6]
1. Attempting to drag the whole of its immense sky-scraper sized frame on to dry land.
2. Spraying a vicious red miasma into the air above itself. Thunder crackles as a result.
3. Staggering and grinding, as if an internal mechanism is broken.
4. In-taking loose sand and silt from the shoreline where a death standing has taken place.
5. Emerging from the depths of the water in the distance, its eyes locked firmly upon any interlopers with hateful intent.
6. Wrapping its brutal cable-strong tendrils around a foreign ship, crushing the hull as though it were as flimsy as tin.

===
Having run my first session of A Knave's Guide to Eberron on 6/15/19, I had a damn good time. The session took place on its way into the Mournlands and the party who were utterly unfit for the job, did a great job botching it, getting maimed in the process, and are now likely going to find themselves hunted by both House Cannith and the Karrnathi military for the knowledge they shouldn't have about a planar experiment to create a more perfect (i.e. less sapient) warforged; which the party believes may have been a catalyst for the Day of Mourning. That's their theory anyway.

I look forward to doing more of these, I'm enjoying writing about this from an attempted pulp perspective, and the Mournlands should thematically really hammer home man's folly and ambitions in everything it is about. At least in my opinion.

Hope y'all like and can make use of any of this. I'd write more, but alas, grad school and factory work in the morrow.