Dolmenwood by the Dozen: Mooncalfe & The Cult of the Glorious Dreaming Moon

Hey look at that, a return to an old blogging thing. I still have all my old article notes saved in a Google Doc. What follows is a character from a bit down the line of articles I had ideas for, but I like the idea of her.

I feel like, of all the things I've written but never finished, this was a series of articles with the most potential. Given that I've fallen in with really enjoying B/X material, I feel that it only behooves me to make stuff with it.

Also two posts in one day, what treachery be this? 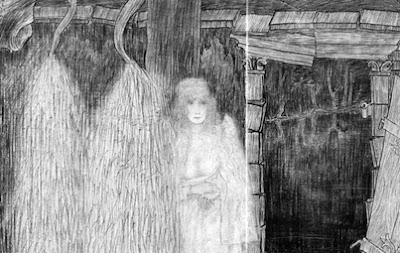 Mooncalfe, pale of complexion and of hair, touched by the strange voices of the night sky since a child; must appease them with blood. Called this by her mother because she is as sweet and caring as a calf to its cow with skin as pale as the luminous moon. A drunewife, she wears a hooded cowl of weasels, stitched together and not-quite-dead, as she scampers through the midnight woods of the Dwelmfurgh. She has taken to humming in mockery in the same tune of the weeping brides of Lord Malbleat, whose estate she enjoys stalking the periphery of.

She knows well the secrets of the Drune, she attends the midnight meetings of lesser cultists in the form of an albino rabbit. She hastens to grow the anxieties between the folk of Lankshorn and the Drune Lodge. She herself has been bewitched since birth, she took her first breath at a moment when the godlet Ambule stirred from chalky slumber. She works, unwittingly, to the godlet’s ends.

She has killed, thus far, three pilgrims in the woods. The Drune are aware of these killings and grant tacit approval to the violence used to protect her family homestead. She has made kilnlings around their severed heads, and the clay she’s used are rich with chalk. Ambule can feel the movement of these kilnlings, like a stirring comfort to rouse the godlet from slumber.


Mooncalfe’s Plots
If Mooncalfe continues her plots, she will eventually come to control a small cult to Ambule (or as she will call the godlet, the Glorious Dreaming Moon). The members will mostly be made of foolhardy, desperate, and would-be occultists in Lankshorn and Dreg (stat as acolytes) and they will begin to make silent pilgrimages to the eastern edge of the Dwelmfurgh to pray at Prigmarinn Hill and carve their name into the column in chalk. She will have 1d4 followers within a month of starting the cult, gaining an additional 2d6 acolytes for each month that follows. They pray here on the night of the New Moon and the Full Moon.

The Drune will notice her actions at a rate of 1-in-10, gaining an additional +1 to that roll every pilgrimage her cult takes to Prigmarinn Hill. There is always a 50% chance any Drune will misogynistically think this is just drunewife idiocy and reset this counter back to 1-in-10.

The authorities of Lankshorn and Dreg will notice her actions at a rate of 1-in-20, though if her followers begin to attack church-goers or priestly sorts (and they just might), she will then be noticed at a rate of 1-in-10. The authorities gain an additional +1 to this roll every moon cycle or whenever a prominent citizen returns from the Hill, baptized in chalk.

Members of the cult speak only of beautiful dreams, of dwelling in a palace in the clouds, hands affixed to pillars in garlands as they are fed by waifs and angels. This is when they can speak at all. Those who join the cult slowly lose the ability to sleep their mind is bewitched with pleasing images of dreams, but sleep itself is anathema to them such that a sleep spell will drive them into a fit of screaming (suffering 2d4 damage per turn they'd have slept). Mooncalfe kills the most far gone, using them to make new kilnlings (see Wormskin #7).

What are her followers like? [d12]
1. Unnatural pallor to their flesh, paler than an albino, paler than bone.
2. Collects only white dust as detritus and filth upon their person.
3. Coughs a wheezing cough, exhaling powder much like flour.
4. Has begun carving names into their flesh, identical penmanship to those found at the Hill.
5. Wears an upside rabbit mask of rotted wood and whitewashed paint.
6. Wears pumice and white stones, tied to their limbs with twine. Walks strangely.
7. Hums a strange melody, like weeping mourners.
8. Wears a white woad upon their naked flesh, made from chalk powder and bird feces.
9. Has a zombified gait, as if in a drunken stupor or devoid of cognition.
10. Preaches loudly and insanely at night, running naked through the streets wearing a pumice mask shaped like the moon.
11. Hands are drenched in many coats of dried blood, speaks numbly, wants to feel "the ivory liquid" of the glowing chalken moon god.
12. Wears a wooden token of birch, carved to look like a weasel bent in the shape of a crescent moon.

Who has been converted? [d12]
1. Pilgrims, from far-and-off settlements.
2. Tax collectors from out of Castle Brackenwold.
3. Drunks and lechers out of Shantywood Manor.
4. Goatmen and half-goats from Lankshorn.
5. Rivermen and boatswain from Dreg.
6. A wandering friar and some woodland guides.
7. Students of Antiquated Cults & Developing Religions from the Royal College of Loom.
8. The least of the Drune, young men who can barely wear a hood let-alone cast a spell.
9. Wandering mercenaries who felt the need to find a new god.
10. Young teens from Lankshorn and Dreg, eager to be edgy and "pagan."
11. Moss dwarfs, now desiccated, dehydrated, and powdery.
12. An important local figure; a blacksmith, banker, or friend of the party. They were coerced.

Bringing Mooncalfe to Justice
The Drune will not care about Mooncalfe or her mortal thralls for the most part, they will give her a stern talking-down-to if she brings too many woodsfolk too close to the Dwelmfurgh’s borders; but they will generally consider her just to be foolish and lonely. If they learn about her connection to Prigmarinn Hill, they will respond with a desire for violence against her---but they fear that any open attacks might bring reprisals from Lankshorn and Dreg; a threat they hardly desire to see attack them. Adventuring parties who are of friend to the Drune (as much as a friend can be to the Drune) will be granted access to one of her magical items upon her death; though they will demand the body be returned to them for proper evaluation.

Lankshorn will want Mooncalfe dead or "imprisoned." Lord Malbleat described her physique in blood-curdling terms after seeing her once from his manor’s window; he'd take her for a wife if imprisoned---and this would cause strife against the Drune, surely. The goats do not know of her magical equipment, and thus will have zero claim to it upon her death. Malbleat will pay in petty favors and a pittance of gold for her head, though he’ll offer petty titles additionally for her to be delivered to him in shackles.

The folk of Dreg want her dead, specifically they want her body to be burned at the stake like a witch. They want this to set a message, and the whole rogue’s gallery of a town will pay a “permanent” discount on goods and services, as well as the offering of a freshly dredged river vessel; large enough for travel along the Lake and cramped living quarters. It was an old fishing vessel, and if the party doesn’t want it, they’ll use the wood to further burn Mooncalfe. They also, do not know of her magical items, though local collectors will remark on her “gem-stone knife” and offer a fine price for it.

What if we ignore her?
Within a year, she’ll have several hundred soulless thralls under her command and Ambule will stir in its divine slumber, granting her visions of the world as a white-dusted wasteland of deathly chill and strange songs. She will begin to interpret any rumors of the Cold Prince as him being a herald of her god, and she will assist in those endeavors alongside her people at every turn. If, somehow, she survives to see the Cold Prince return; he will look at her for half a moment before cutting her to ribbons and remarking to a lieutenant about the strangeness of the newer Drunesfolk.
at April 05, 2019